Maybe The Blessing is at the Bottom? 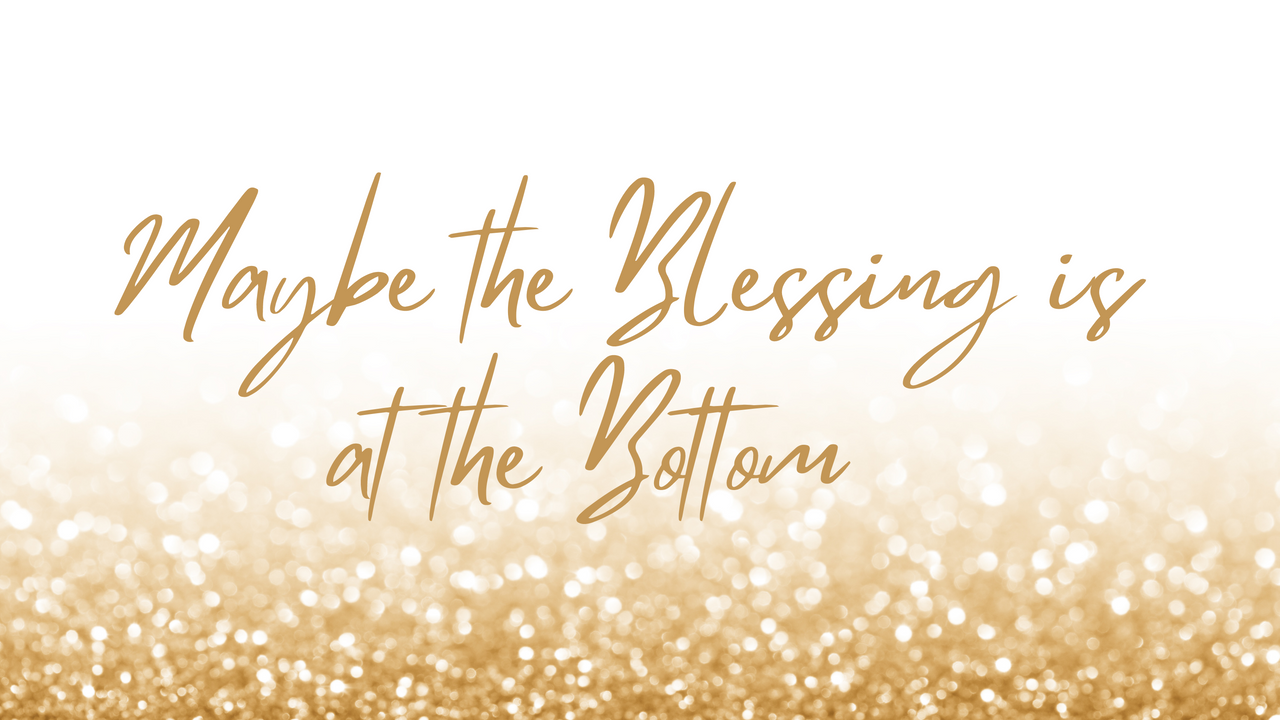 We all face various trials and I’ve had more than I would have chosen, but I found my blessing at the bottom.  I found that hope grows down there at the bottom. It's where the pain can escape your bones because that's where we feel it.  This is how I looked up and moved towards the little glimmer of light that I could see, way down at the bottom of the barrel.

My latest trial was just a few weeks ago when I had a client break their contract with me on wicked terms.  Since I’m an accountability coach, lying, stealing, and cheating are negative (evil) behaviors that I point out.  This company was stealing from me and cheating me so I hired my attorney... this is when I really got angry.  Although, my awesome attorney presented the clear-cut evidence of their theft, the company decided to respond with a letter filled with deceit, and that's when my anger consumed me.  This is when I said, "why God don't you stand up for me? You can but you are not" it wasn't until after 2 days of complete anger (more like rage) that I realized I got pulled into the swamp.  The swamp is a place where someone that is wicked (filled with lies and deceit) pulls you into their fighting ring, and I then realized that I failed God’s test (again) for doubting in my faith and not following God’s word.

I immediately repented to God for not trusting him and pulled myself out of the swamp and chose to forgive that company and closed the case.  The Lord told me that it was dirty money and that I didn't want it anyway.  A peace came over me that I can't explain to you.

Suffering doesn't destroy faith; it's supposed to refine your faith.

I learned a valuable lesson at the bottom, while in the dark place.  I found God again, I realized that he signs my paycheck and I had to learn, (faster now) to forgive immediately when someone wrongs me.  When I am following God’s word, I have peace.  When I try to fix everything on my own, I have stress.

A good friend of mine said, “Anyone that has hurt you, just wrap them in a blanket and throw them up to Jesus!”  It really works!

I decided to add up just how much money I’ve been cheated out of in my 14 years of business it's about $92,000! and Personally $200,000 was stollen from me. WOW, that's a lot of money but now I see how blessed I am because the scriptures tell me I will receive 7x what was stollen!  I can pray for these people now.  I even had a man from a company in the past, not hire me because he said that he didn't want to work with a woman.  Crazy right?  I wrapped him in a blanket and threw him up to Jesus... two years later he called asking for my help.  Trust God, not man.

The Lord’s fragrance is found at the gates of praise and His scent is Joy.

There is a blessing at the bottom, sometimes you have to search for it, sometimes it shows up 20 years later.  Your greatest weapon to combat evil is forgiveness.


What helped me was listing out all the areas where I had been broken, let me list out just a few for you.

As a Christian my job is to be a light in a dark place, I see all Christians as bright stars in the galaxy, and we shine brightest when it's dark out.

Focus on what’s ahead --- forgive what is behind