PAIN IS INEVITABLE, BUT MISERY IS AN OPTION – SUPERMAN 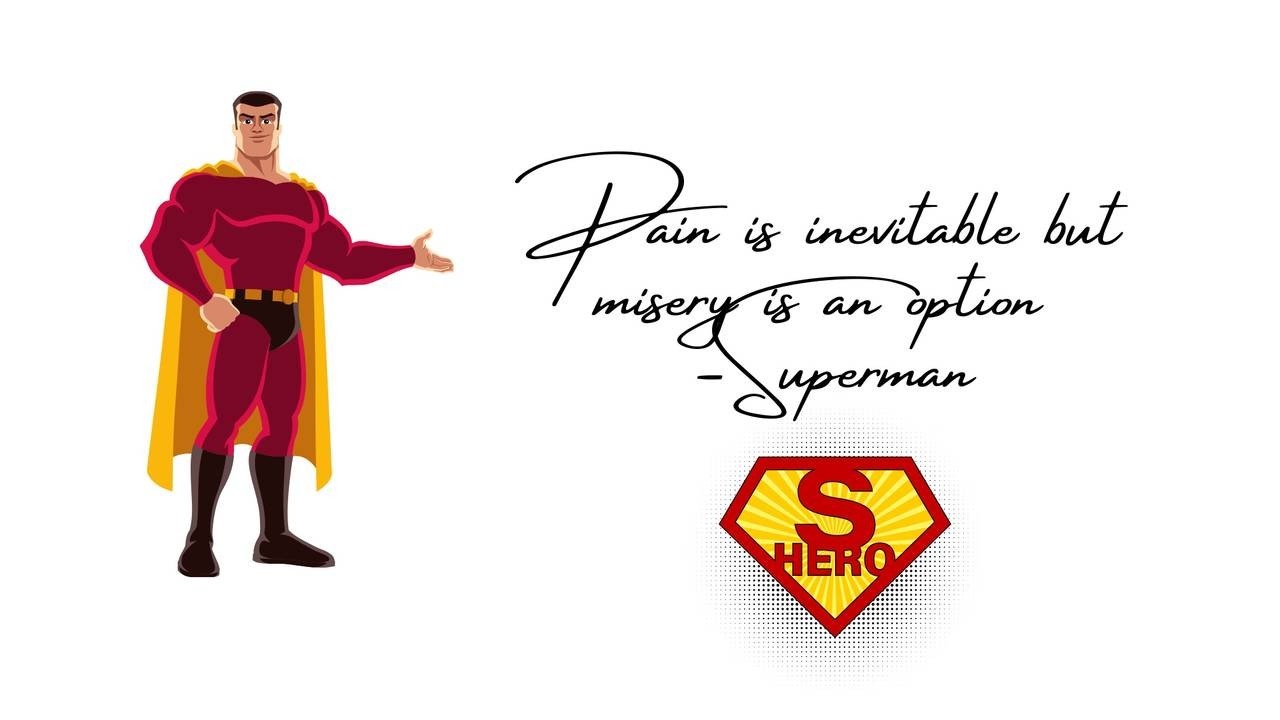 Faith is seeing a rainbow in each tear

“Does it bother you that at one point in your life you were the strongest man on the planet, you were superman.  People from all over the world knew you, they adored you, kids would run home from school to watch you on TV.  You were a superhero. Does it bother you that today in this studio, in a wheelchair, with two tubes behind your back to help you breathe – with tubes in your body for nourishment to stay alive, a team of people that came here today, just to help you do simple daily activities you were able to do before like go to the bathroom and now you can’t.  Does it bother you that you’re physically paralyzed?”

Christopher Reeve, with the kind of spirit and soul that he had, looked back at Larry King and said, “Larry, if this is what God had in store for me then I’m going to make the very best of these circumstances.  No, it doesn’t bother me.  But, do you want to know what does bother me, Larry?  What bothers me is seeing physically able men and women that are physically OK – but are paralyzed in their minds.”

Wow!  Here’s a man, Christopher Reeve, who spent the last five years of his life doing seminars to support research on spinal cord injuries, who wrote 3 books.  Despite being paralyzed, every day he believed and took action by accessing his full potential.

Larry wasn’t finished though.  He asked, “Christopher, so are you afraid of dying?”

Christopher looked at Larry and said, “Larry, I’m not afraid of dying.  I’ll tell you one thing, though.  The day I die, I’m going to make sure that I go out climbing the mountain of success like a victor, like a champion, rather than die at the bottom like a victim.”

Here’s a man who didn’t make excuses.  He could have told himself a story, but instead decided to believe that his life had meaning.

What about your stories?  What if you were to get rid of your excuses and say from this day forward, “I am committed to taking action in the areas of my life that matter most:  my business, my health, my relationships, my spirituality, my finances?  If you were able to destroy your limiting beliefs, what would your life look like a year from now?  Are you more passionate about your life?  Do you wake up filled with energy about your day?  How is your business?  How much money would you earn?  Do you prospect and meet with customers with confidence?  Are you a great role model to your family?  Do your relationships bring you joy?

An Inspirational Short Story
Two Wolves
One evening an old Cherokee told his grandson about a battle that goes on inside people.
He said, “My son, the battle is between two wolves inside us all.
One is Evil. It is anger, envy, jealousy, sorrow, regret, greed, arrogance, self-pity, guilt, resentment, inferiority, lies, false pride, superiority, and ego.
The other is Good. It is joy, peace, love, hope, serenity, humility, kindness, benevolence, empathy, generosity, truth, compassion and faith.”
The grandson thought about it for a minute and then asked his grandfather: “Which wolf wins?”
The old Cherokee simply replied, “The one you feed.”

-Lift someone up today, start with yourself!